Dyeing buttons is not something I usually think of, but here is a tutorial from Rit Dye for dying ordinary plastic buttons.  It sounds simple and easy.  On the website, there are other projects too.
Posted by Cynthia Stockdon at 11:15 AM No comments:

Beena's Blog of A Thousand Faces 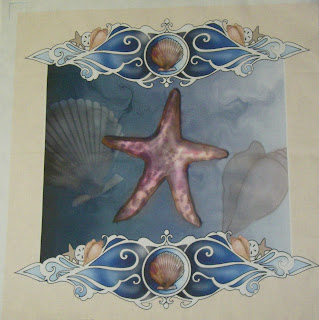 I entered Beena's The Blog Of A Thousand Faces: The "Coffee By The Sea" Giveaway and just received my prize- it is beautiful! Thank you so much!  I will post my finished project- maybe a wallhanging.  I grew up going to the beach every summer.  Any one have ideas for what I should create with this?
Posted by Cynthia Stockdon at 11:14 AM No comments: 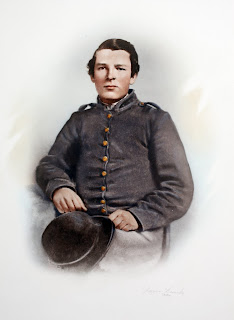 This is Horatio Cornick Hoggard (1846-1919), my great, great grandaddy.  Now politics aside, this is interesting on a personal/sewing level.  And by the way, I had relatives on both sides of the war.  I'm related to Robert Gould Shaw, portrayed in the movie Glory  by Matthew Broderick.  Its a great movie showing how Shaw lead the Civil War's first all-black volunteer company against prejudice on both sides.  Worth seeing.  Back to Hoggard though.  He is shown here wearing two uniforms, one on top of the other.  On the back of the photograph is this letter from Hoggard himself to his son, years later.
"This picture was taken a few days ago from an old daguerreotype, which I had taken in Petersburg, Va. in the later part of Dec.1863, on my return trip from my home on Broad Creek Princess Anne Co. Va. which was then (and had been in the enemies lines) since May 1862 when we evacuated Norfolk.  I left camp near Orange Court house on Dec. 7- with an 18 day furlow, went home, and remained there 8 days, and returning arrived at Camp Xmas eve night, the very night my furlow expired.  The suit of clothes I have on, was bought at Peter Smith's Store on Main St. Norfolk, of Mr. Wm. Hall, by my Sister Margaret, who secured the cloth, and trimmings under her hoop skirts, and carried it home past two Union Soldier guards without being detected, cut it out, and made the suit (without a pattern) and made it for me, and while it did not fit quite as well as a Tailor made suit, it was worth much more to me and was very comfortable.  I also carried out two extra hats (one in the other you will notice) one for my brother Thurmer, and one for N.F. Bill whom I left in camp- beside my inside pockets were filled with socks and hankerchiefs for three.  The Union Soldiers kept guard on the river in front of our home while I was there (patroling the river) but they never knew that I was ever home, and although Lucy (our cook) was there, and knew it, she never reported me."
I think this shows a very personal, private peek at people during the war.
This story along with many others is published in the Virginian Pilot- Voices of the Civil War book.
Posted by Cynthia Stockdon at 2:50 PM No comments: 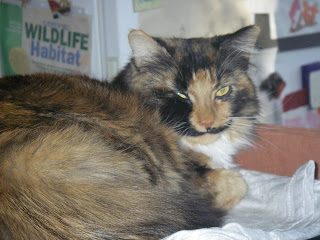 You know I couldn't let this day go by without cute pet pictures!  Above- Alice (the mustached sister). 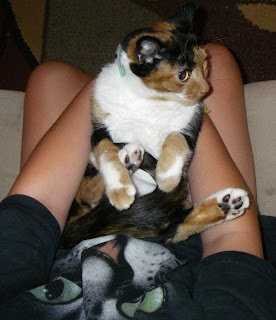 Emma is in my daughter's arms, trying very hard not to look the t-shirt cat in the eye. 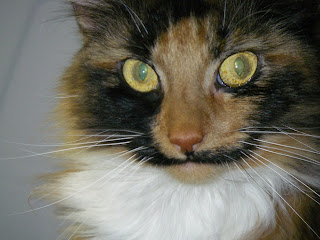 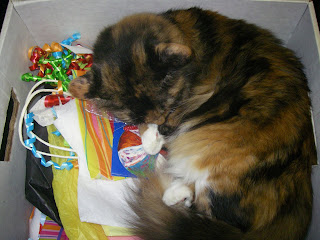 Alice, in the gift wrap box.

Cat bliss- sisters Alice and Emma sleeping on the fridge.  Thanks for indulging me today!
Posted by Cynthia Stockdon at 9:10 AM 1 comment: 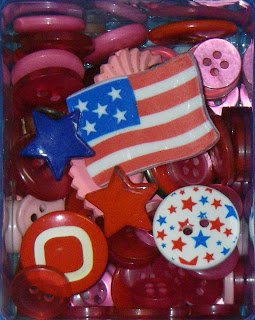 In honor of Armed Forces Day- Patriotic Quilts!  Actually, any quilt in red, white and blue could be considered patriotic.  With that in mind, these reversible drink coasters could be included.  I've been wanting to sew a large wall hanging.  It would be really easy using flip quilt instructions.  Robert Kaufman has some armed forces and flag prints.  A selection of red, white and blue fat quarters could be used in a patriotic quilt.  A quilt made of bandanas in red white and blue would be pretty.  I just bought a very unusual bandana from Walmart for $1.00.  Actually, the more I think about it, the more I might need to go back and buy enough to make a quilt!


Enjoy and be inspired while we celebrate Armed Forces Day.﻿


Posted by Cynthia Stockdon at 5:00 PM No comments: 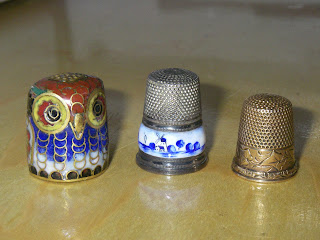 ﻿
Thimbles are extremely helpful for protecting your fingers during hand sewing.  Apparently they are very, very old.  Here is a brief history of thimbles.  The Fingerhut Museum in Creglingen, Germany is the only dedicated museum in the world.  I find this hard to believe!  Everybody has thimbles, even the Cherokee Museum has a very colorful one.   You can buy a Royal Wedding- Will and Kate commemorative thimble too.  Here are State Thimbles.  Nancy's Notions carries some cute thimbles.  There is even a Museum of thimble holders and items holding thimbles.    What about functional thimbles though?  Clover thimbles is a good place to start.  To find just the right size try here.  And, in case you didn't know, thimbles are supposed to be worn on the middle finger of the dominant hand (or where ever works best for you!). 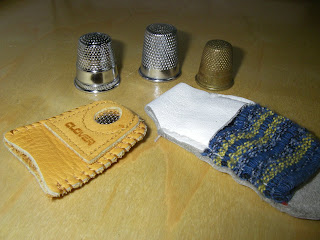 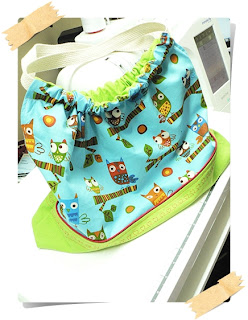 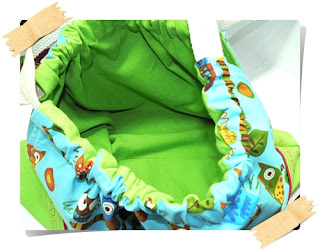 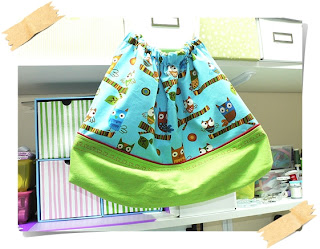 Maryse recently purchased my weekend bag instructions and wasted no time getting to work.  I love the owl fabric and how she added a fancy machine stitch below the piping! 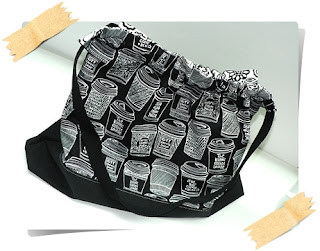 This is her second bag.  A change of fabrics completely changes the look. 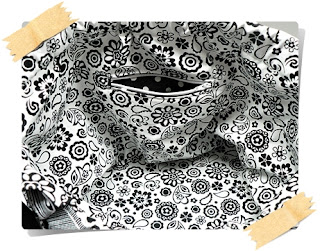 The inside zippered pocket is a great idea. 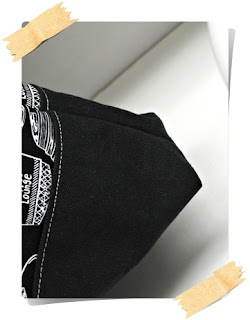 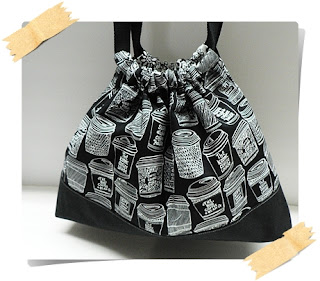 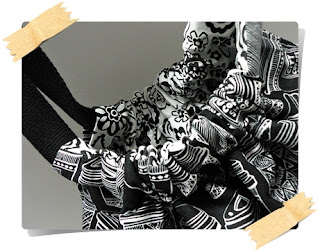 Maryse, you did a wonderful sewing job on these purses.  Thanks so much for sharing your pictures!
Posted by Cynthia Stockdon at 2:15 PM No comments: 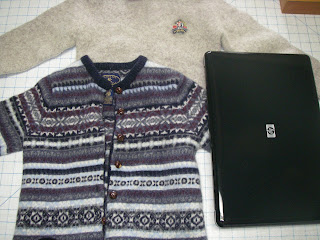 Recently, as I was cleaning up my sewing room, I came across a couple of felted wool sweaters.  Perfect for a laptop cozy!  A crew neck and a cardigan, neither one large enough for the project, so I used both. 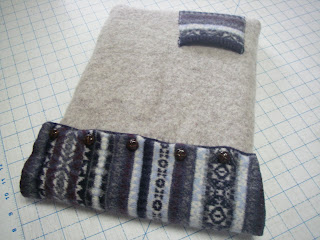 I just cut and sewed what seemed like the right size.  It is great using sweaters because they stretch and are very forgiving if the size isn't exact.  I added a pocket and a flap out of the cardigan sweater.  The buttons were from the cardigan also. 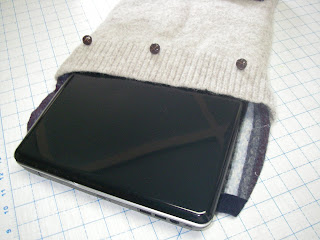 I thought buttoning and unbuttoning 5 would be tedious, so I made only 3 functional.  Since the flap is felted and won't unravel, I just stitched it on without edge finishes- super easy. 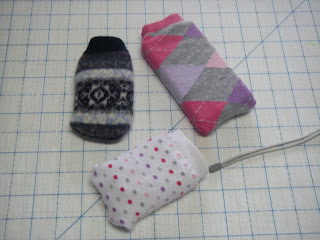 I was on a roll, so I made sock cozies for my daughter's camera, phone and nintendo! 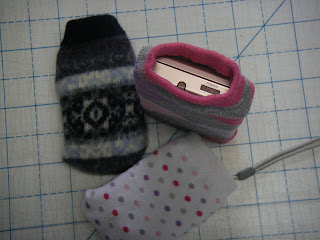 I made them narrower at the open end so they would be snug and not slip out.  My daughter (11yrs) just rolled her eyes at me when I showed them to her, but I know she secretly loves them!
Posted by Cynthia Stockdon at 5:39 PM 1 comment:

Hope everyone has a lovely weekend!  I'm hoping to relax, play with the kids.  My daughter says she will paint my toes.  I'm hoping I won't have to listen to any arguing kids.  And I told my husband that I don't cook on Mother's Day.  I'm looking forward to it!
Posted by Cynthia Stockdon at 4:48 PM No comments:

I'm included in an etsy treasury- Kiss Me I'm Irish!  Moose Country chose my lucky paperweight creature to include.  Thanks so much MooseCountry!
Posted by Cynthia Stockdon at 2:00 PM 1 comment:

I love these sewing machine cookies by Sweet Sugar Belle!  They look amazing.  The sewing notion cookies by The Bearfoot Baker are so fun!  My stomach is growling.
Posted by Cynthia Stockdon at 10:49 AM 1 comment: 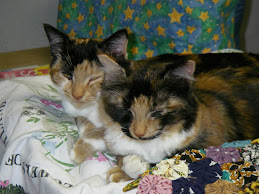 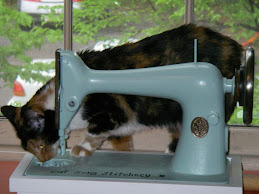 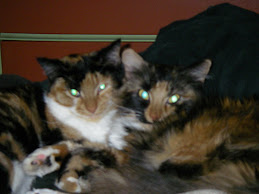 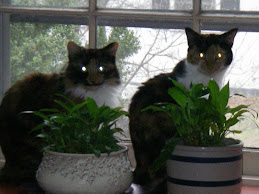